A Moment of Joy

You never know when something will happen that will surprise and delight you.

As I was walking through the parking lot, on my way to get groceries.  I smiled at a woman loading her car with hanging baskets of wilted petunias.
Just as I passed her, she called out to me.  I turned to see her waving me back toward her.
Not sure what she needed, I walked back over.
Smiling, she said something in Spanish and handed me one of the baskets.
I understood enough that there were no more, and this was for me.  She said "agua" and then motioned big growth.
Her daughter watched us as we tried to communicate.
It was a moment of pure joy.

My little Poquito is 2 years old and going strong but during summer I have to adjust my baking schedule so I can still make delicious bread but not heat up the whole house.
With just a few simple ingredients (starter, milk, butter, flour and salt) these soft pull-apart bread rolls are simple and delicious.
I just mix the dough before bed, let rise overnight and bake in the morning. 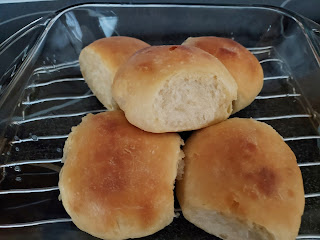 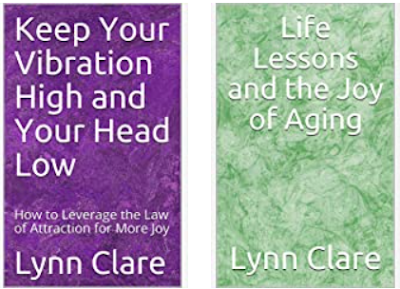 Author Page
Posted by Lynn at 11:00 AM No comments:

In honor of St. Patrick's Day, I wanted to make some of my favorite Irish dishes.  Some of the ingredients are not available in the U.S. so with a little creativity, and a lot of inspiration, I created some mock versions that will have to hold me over until I can return for the authentic Irish version!
Full Irish Breakfast - This is a huge, hearty, soul satisfying meal to start your day.  It is usually too much food for me, and I don't care for the black pudding, so I usually opt for the mini fry. 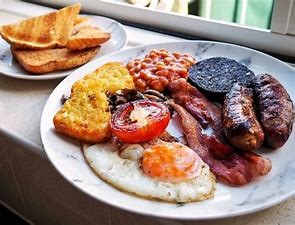 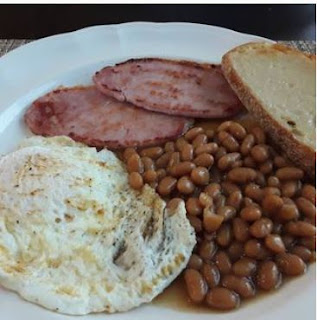 U.S. - Egg, Beans, Uncured Canadian Bacon, Toast.
Lunch is usually light - soup with bread, a ham and cheese toasted sandwich, or leftover baked beans on toast. All are easy to replicate and delicious. 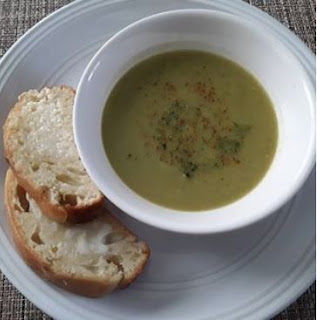 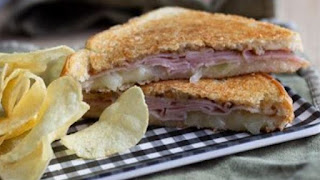 My absolute favorite is Bacon and Cabbage.  This is the national dish of Ireland (not corned beef) and is very much like the heart-warming boiled dinner my grandmother used to make for Sunday Supper.
Irish Back Bacon is impossible to find in the US, so I substitute Ham and it is reasonably close but definitely not as good as the original. 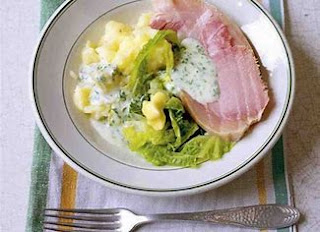 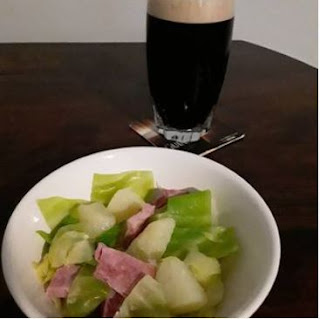 U.S. - Ham, Potatoes, Cabbage, Butter Cream Sauce
Last but not least on my list is Guinness!  There is nothing in the world that tastes like a fresh pint of the black stuff from Ireland! 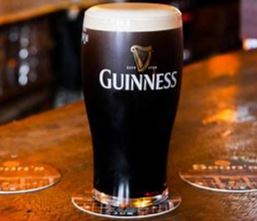 It was just a few weeks until Christmas and I could hardly wait.

We had moved into our beautiful new house, and I had my very own bedroom.  No more sharing with my annoying younger brother.
Mom was busy decorating and getting ready for the holiday.  I’m not sure I had ever seen her so happy.  She finally met someone who treated her well and even liked us kids too.
Buzz was a kind man, quiet and gentle with a warm smile.  Walking in with his dusty work boots, exhausted from work, he was never too tired to pick me up and give me a huge bear hug.
We were living a life I could never have imagined.  There was so much food in the house we had to put another refrigerator on the back porch.  We didn’t have to worry about moving in the middle of the night because we couldn’t pay the rent.  Life was very good.
“You are not going to start another project this close to Christmas” I heard my mom telling Buzz.
He was always working on something.  He built a new patio with a rock garden for mom in the summer and a mini playhouse for me and my brother.
Despite her protests, he began working.
It was unusual for him to be doing it inside, but it was winter, so I didn’t think much of it.
Mom was beside herself with the mess.  She had worked so hard to clean and decorate the house.  He had even pushed the Christmas tree off into the corner.
I was surprised and confused when I came home from school and saw that he was actually tearing down the living room wall.
He and mom almost never argued but this was different.  There were pieces of wood and sheet rock everywhere.  I was happy I had a room to go to where I could stay away from it all.
As the days passed, mom accepted that this was going to happen whether she liked it or not.
Just a couple of days until Christmas now and I was more excited than ever.  This was our first Christmas in the new house.
Behind the canvas tarps, Buzz worked away, he looked like the Wizard of Oz behind the curtain.
He even enlisted my brother to help with his “secret project”.

I was a little jealous that I wasn’t included but I kept myself busy playing with my dolls and reading in my room.
Finally, it was Christmas eve.  I knew this year would be special, but I had no idea how much.
After dinner, mom sent me and my brother to our rooms.  “We have something to do before Santa comes, so you have to stay there until we tell you to come out” she instructed “and no peeking” she nodded to my brother.
Presents, it must be our presents we both thought.
When she opened the door, she told me to close my eyes.  Gently guiding me, we walked into the front room.
What I saw when I opened my eyes was the most beautiful fireplace I had ever seen.
That is what Buzz had been working on.  Whoever had lived there before had covered up the fireplace with a wall.
It looked like something out of a fairy tale – the fire was glowing with twinkles of light reflecting on the hearth.
Under the tree were two boxes, one for me and one for my brother.
We didn’t usually get to open any gifts before Christmas morning, so this was another unexpected surprise.
My box was not wrapped, so it was easy to just open the top.  As I did, up popped the most beautiful little gray kitten in the world.  I immediately began to cry, as I carefully lifted her out of the box.

“Is she really for me?” I asked in disbelief, petting her gently. "I think I'll call her Thumbelina because she's so tiny" I said.

My brother grinned at me and began opening his package.  It was a toolbox with real tools to build things, he was thrilled.
Mom smiled and watched quietly as we laughed and played.

Buzz reached down from his rocking chair and lifted me, still holding the kitten, into his lap.

It was truly a magical Christmas.
Posted by Lynn at 11:58 AM No comments:

Every week when I feed my sourdough starter I like to use the "old" discard to make something easy, usually pancakes or flatbread.
Today I had some leftover pineapple and thought this would be a good way to use the fruit and the discard.  It was great - moist and delicious and only took a half an hour. 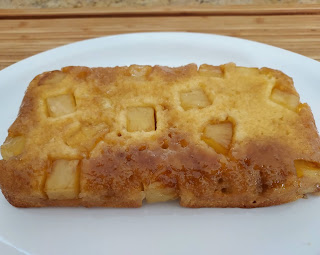 Email ThisBlogThis!Share to TwitterShare to FacebookShare to Pinterest
Labels: Pineapple Upside Down Cake

With hot summer days approaching I always start thinking of fresh, seasonal foods that don’t require cooking. This salsa is so easy and versatile that it has become a favorite for our family. 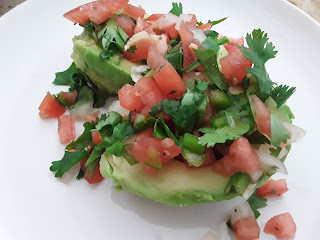 We have always loved going out for Mexican food and enjoyed the salsa they serve with the meal. We noticed how different each salsa was in taste, texture and spice level. Same with the jarred salsas we purchased from the grocery store.

I wanted to try making it at home, so I began to experiment. What I found is that even with the exact same ingredients you can come up with an entirely different salsa. Some are cooked or blended, others chopped. It’s all personal preference but we love the flavor of the raw vegetables and a nice medium heat.

How to Use Salsa

We have found so many ways to use this salsa it’s almost become a game to see what else we can put this on. Here are some of our favorites: 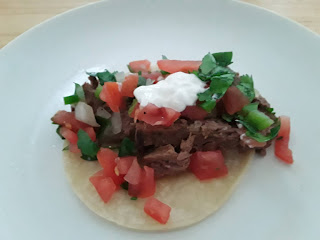 In a large bowl, combine all ingredients and adjust seasoning to taste. Cover and chill until ready to serve.

Notes: For a milder salsa reduce the amount of jalapeno. Also, this salsa can be blended and stored in a plastic baggie for several months in the freezer. I use it as a flavorful addition to soups and stews. 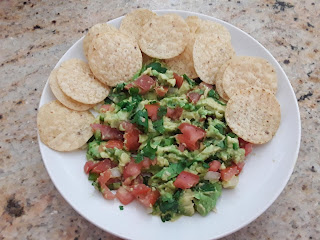 Lynn
I am a very happy mother and grandmother having an amazing experience in my life. I love to travel and write about my adventures all over the world. Happy Travels!